Il Grissino: its history and curiosity 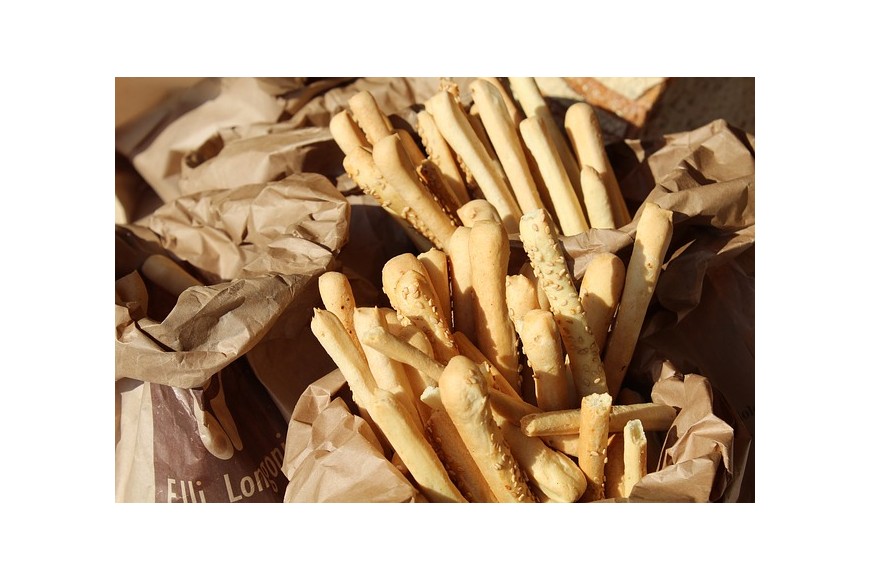 The name Grissino derives from the Piedmontese word "ghersa", which indicates the classic bread of the tradition of elongated shape.

The birth of this typical Turin is closely related to its history. It is said that the young Vittorio Amedeo Francesco di Savoia (1666-1732), future king, was particularly frail and that he had difficulty digesting breadcrumbs. The doctor of the future Vittorio Amedeo II, Dr. Pecchio di Lanzo, when the infant was two years old (1668) asked the baker Antonio Brunero to produce a light and more digestible bread. The brunero thought well to modify the bread in use over time (the "ghersa") reducing its crumb by pulling it and thinning it until it became a well-cooked stick with a crispy crust and very little water.

It was a natural name to call it Ghersin or small ghersa.

Then there is a second less and less fascinating explanation of the origin. It seems that in the second half of the fourteenth century, when it was sold in units and not by weight, because of the inflation that struck the Piedmontese the "grissia" (the typical bread form) became ever lighter and thinner enough to become "gherssin "(small bread).

It involved the intervention of four bakers. The Stiror (he who stretches), the Tajor (he who cuts), the Coureur he who puts) and the Gavor (he who takes away). The stiror stretched the dough, the tajor reduced to paste, after the manipulation of the first, in pieces of about 3 cm. The Coureur placed the sticks on a long and narrow pallet and introduced them in the Piedmontese oven (working with poplar wood). The gavor as last had the task of extracting the sticks from the oven and breaking them in two.
The oldest and most traditional form of breadstick is the "rubatà". It is 50/70 cm long up to 80 cm. Hand kneaded from the dough so knotty is so called because the term means rolled. The Chieri rubatà (a town bordering on Turin) is included in the list of traditional Italian food products of the Ministry of Agricultural, Food and Forestry Policies.
The type of processing allowed, starting from the eighteenth century, mechanized production.

This "rind-only bread" is reduced with only 00 flour, water, yeast and salt. Recently the products called "breadsticks with olive oil, water, soft (added animal fat) are marketed, limiting their duration.
Flavored breadsticks such as sesame, fennel, chilli, rosemary, saffron, cumin and others.
Breadsticks with walnuts, olives, truffles etc. until you get to the sweet variations with chocolate with sugary or caramelized (personally we recommend a few rubatà and a couple of squares of dark chocolate). Breadsticks can be produced using, instead of 00 flour, whole wheat flour, buckwheat, kamut, spelled, bran, corn and rice.
Of note is the production of gluten-free breadsticks for celiacs.

Recipe:
The breadstick in a short time from his invention became the basic ingredient of the supermaketha. Typical dish of the Waldensian cuisine in Piedmont where this crunchy stick went to replace the stale bread used previously.
Supa Barbetta ingredients (4 people): 500 gr of bread sticks, 1 liter of meat broth, 100 gr of toma cheese, 50 ml of tomato sauce, pepper, cinnamon, cloves.
Distribute in layers sprinkling as the whole cooks for about 1 hour at the end sprinkle with plenty of grana padano.

Historical curiosities:
The grissin quickly became the host of all the tables, both modest and noble.
-The princess Maria Felicita of Savoy (1730-1801) loved so much the new bread to be known as the "princess of the breadstick".
-The King Carlo Felice ate them even at the theater so much that Massimo D'Azelio portrayed him in this way "with dexterity he swallowed, holding them with heads and two fingers and squeezing his teeth early the other early."
-In Louis XIV's France attempts were made to imitate him, two Torinese craftsmen arrived in Paris, but the water of the Seine and the air were not as good as those of Turin and results were modest.
-Napoleone Bonaparte fascinated by the taste of the Turin breadstick organized periodic transports between Turin and Paris to have them always fresh defining them "le petits batons de Turin elegants et savoreux".
-Maria Luisa of Austria, on the other hand, broke them into broth.
It seems that, in his beloved palace of Venaria, Vittorio Amedeo II walks among the salons accompanying himself with a basket of his dear breadsticks.

All fields are required