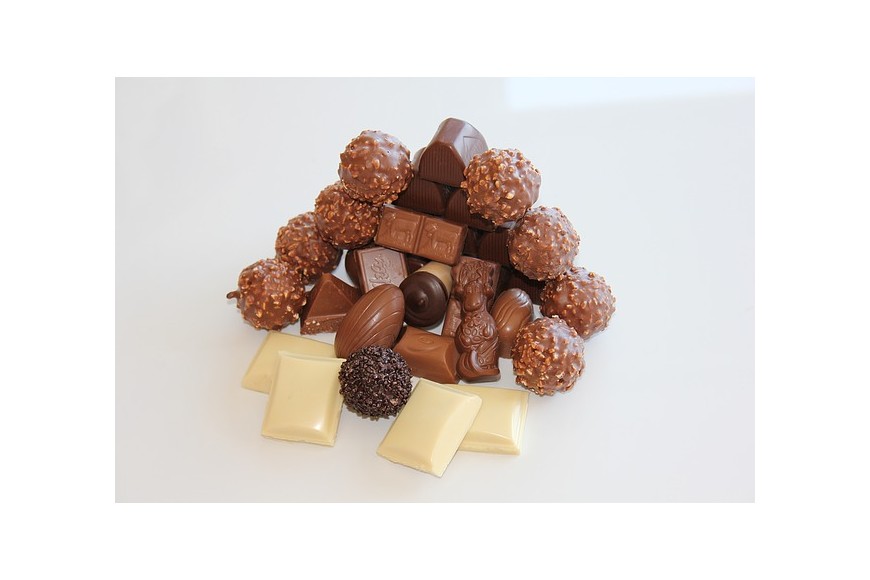 1) Gianduiotto: an inverted and wrapped boat made of cocoa, sugar, cocoa butter and toasted and ground hazelnuts.

Michele Prochet in 1852 Turin chocolate maker, as the cost of imported cocoa was always higher, he tried to "stretch" the product with hazelnuts. As it happens, the Tonda Gentile delle Langhe contains a fatty part due to the presence of oils, thanks to which it was possible to mix the hazelnut cocoa with excellent results: in this way the gianduja pasta was born.

In 1865 Gianduja mask of the Piedmontese theater was commissioned, during the carnival, to distribute the chocolates (which later took his name from him) to passers-by for promotional purposes.

It is useful to know a few things. The first is that the mask was called in dialect Gioan d'la douja or Giovan del boccale. The second is the reason why this mask was chosen. During the Napoleonic and then Risorgimento periods gianduja was a symbol of the struggles for independence and also because in the last week it was Christmas that he used to distribute candies in hospices and hospitals.

The first to produce giandujotti were Prochet and Caffarel in San Donato village in Turin. Peyrano later created a new "edition" of giandujotto by adding milk and a pinch of vanilla to the dough.

2) Alpino: dark cup that contains a liqueur cream whose recipe is secret. Created in 1922 by Peyrano protected by a trademark patent since 1935.

3) Bacio di Cherasco:  in Cherasco, a town in the Cuneo area, this irregularly shaped chocolate is produced, coated with toasted hazelnuts and chopped with dark chocolate.

4) Bassinato: it is obtained by coating the raisins or almonds or hazelnuts or coffee beans after making them crispy. The name derives from the French term bassinne. It is also an instrument used in the pharmaceutical technique for coating tablets, for example.

5) Boero:  dark sugar covers a "spirited" cherry in cognac and in turn coated with dark chocolate.

6) Cremino: is a gianduja layered chocolate, chocolate or coffee or lemon cream. Ferdinando Baratti invented it in the mid 1800s in the confectionery opened in Turin with his partner Edoardo Milano, hence the name "Baratti & Milano"

7) Cremino Fiat: In 1911, Fiat launched a competition among the Italian chocolate makers for the launch of the new type 4 model to create a new chocolate to combine with the machine. He won Majani of Bologna (first chocolate company born in Italy in 1796) who made a 4-layer cremino instead of the usual 3.

8) Cri Cri: hazelnut covered with dark chocolate and a white colored grain of sugar. Almost certainly conceived in Turin by Decoster in the early 1900s, all wrapped up like candy.

9) Cuneese  al rum: It consists of two meringue waffles stuffed with a dark cream and rum covered with a layer of dark chocolate. They were designed by Felice Galletti, but it was the pastry chef Andrea Airone who patented them, becoming famous all over the world. Even Ernest Hemingway stopped specifically in Cuneo to buy them.

10) Diablotino:"diablotin" the oldest chocolate, very easy to make even at home. 60gr of sugar plus 60gr of grated fudge plus three tablespoons of water, melts without boiling the dough. Then form small balls on a plate and when they are still lukewarm crush them to form small disks that can be dusted with vanilla sugar.

11) Ganache: it can be hazelnut, chocolate or white chocolate. Of French origin "discovered" by Ganache by mistake as he poured boiling cream over chocolate. The cream can be used to make bundles containing hazelnuts, but also with white chocolate.

12) Giacometta: handmade product born as Pralin that in 1975 Giordano changed to Giacometta (Gianduja's partner). It is a grain of Piedmont hazelnuts covered with gianduja. This creation allowed the company to win first prize at the International Chocolate Awards 2013

13) Grappino: created in 1962 by Peyrano. Chocolate with grappa core coated with dark chocolate. It has a peculiarity is dear.

14)  Napolitains: although it is not of Piedmontese origin, it is produced in good quantities, despite the name it has nothing to do with the city of Naples. It weighs on average 5 g and measures 3 cm by 3cm. It is perhaps the most popular in the world for its simplicity since it was born initially from the simple division of a chocolate bar into several parts. These small squares are wrapped and can be made with various types of chocolate.

15) Tartufo: ganache base mixture with hazelnut praline, another version is obtained using liqueur and finally sprinkled with bitter cocoa.

All fields are required